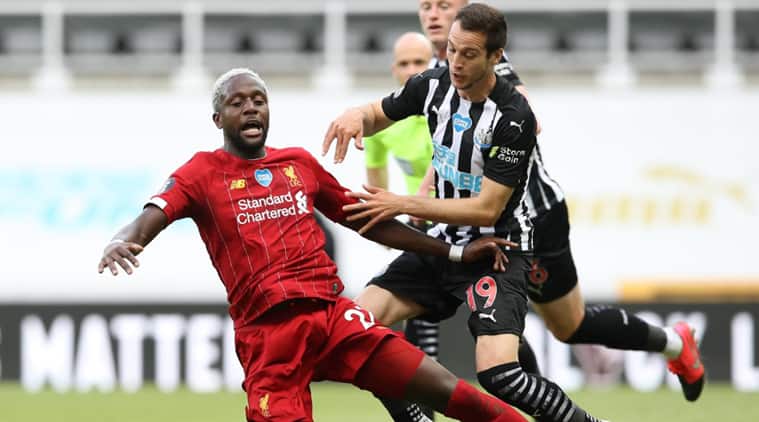 Striker Divock Origi scored a rare goal as champions Liverpool came from behind to close out their magnificent Premier League season with a 3-1 win at Newcastle United on Sunday.

Liverpool ended the campaign on 99 points, 18 ahead of nearest rivals Manchester City while Newcastle finished 13th on 44 points.

Liverpool went behind to the fastest goal ever scored against them in the Premier League era as Dwight Gayle latched on to Jonjo Shelvey’s free kick and slotted it past Alisson with 26 seconds on the clock.

With Liverpool having made five changes to the team that started the 5-3 win over Chelsea on Wednesday, it fell to ever-present Virgil van Dijk to score the equaliser with a towering header seven minutes before halftime.

Belgian forward Origi, who had not scored in the league since bagging a brace against Everton on Dec. 4, put the Reds in front in the 59th minute, cutting in from the left before curling the ball in at the far post.

Liverpool turned the screw by bringing on the attacking trio of Sadio Mane, Roberto Firmino and Mohamed Salah in the 64th minute, and Newcastle struggled to deal with their clever movement.

Adopting a shoot-on-sight policy as he chased his 20th league goal of the season, Salah hit the post and it was Mane who fired home in the 89th minute to round off the season in style for the Reds.

“We knew it was going to be tough, and we made it even more difficult for ourselves after I don’t know how many seconds. But we played well, second half was outstanding I think. Good to finish up the season on a high,” Van Dijk told BT Sport.

Brazil striker Gabriel Jesus stabbed home the opener from close range in the 11th minute from Raheem Sterling’s low cross after the England winger sparked panic on Norwich’s right with a quick exchange of passes with Kevin de Bruyne.

Belgium international De Bruyne added the second with a sumptuous strike just before halftime, collecting Kyle Walker’s pass on the edge of the box and curling the ball past Norwich keeper Tim Krul and into the top corner.

Silva, who is out of contract at the end of the season, was involved in Manchester City’s third, passing wide to De Bruyne, whose inch-perfect pass played in Sterling to slot home past Krul in the 79th minute.

Norwich, who ended the season with 10 league defeats in a row, had the ball in the Manchester City net in the eighth minute, but Onel Hernandez’s effort was ruled out for offside after a video review.

Fitness for Life by Time-Life Books