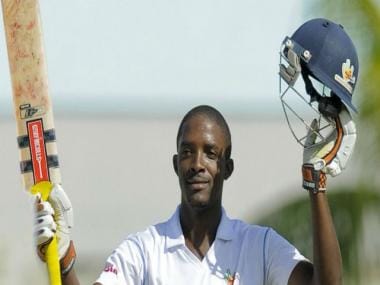 West Indies all-rounder Carlos Brathwaite expects batsman Shamarh Brooks to be a key player for the team during the upcoming Test series against England despite his limited experience as India legend Rahul Dravid has predicted a great career for him.

Brathwaite recalled the time when Dravid told him how highly he rated Brooks, who has played just three Tests so far.

“If they have a bad start Brooks is very dependable. He can soak up the pressure and transfer that pressure once the ball gets older and the spinners come on. Brooks is very driven to get some big scores on this tour and I expect him to be the breakout star,” he told the BBC.

“India legend Rahul Dravid spoke to me about Brooks two years ago after he scored 122 not out and 91 for West Indies A against India A in England.

“Dravid made a note of him and said he was destined for big things. Dravid is my idol and for him to endorse Brooks just cemented what I have known about him growing up,” he added.

The series begins on Wednesday and marks the return of international cricket amid the COVID-19 pandemic.

Brathwaite also feels that West Indies skipper Jason Holder’s impact as an all-rounder has not been appreciated enough in international cricket and reckons that the first Test will be a battle between him and Ben Stokes.

Brathwaite put Holder on top of his list of players who will be crucial to their campaign in England, set to be led by Stokes in the absence of Joe Root.

Holder had scored 229 runs and took seven wickets in two Tests against England in 2019 at home though he has never scored a Test fifty in England.

“When discussing great all-rounders in the world at the moment, you talk about Ben Stokes or people mention Mitchell Marsh. No-one mentions Holder, who is top of the ICC rankings,” Brathwaite said.

“His consistency and calmness as a bowler and a batsman sets him apart.

That calmness also helps him as a captain — he is very level-headed, even in hectic situations — although off the pitch he is the joker of the group.

“The first Test is set up perfectly as a crucial battle between the two all-rounders and captains, Holder and Stokes,” he added.

Brathwaite believes that, “lack of acknowledgement for Holder as the number one all-rounder in the world will drive him to prove it in this series.”

For Brathwaite, Roston Chase, Raymon Reifer or Rahkeem Cornwall will be instrumental in shaping West Indies’ fortunes in the series.

Irina Slavina: Final protest of Russian journalist who set herself on fire