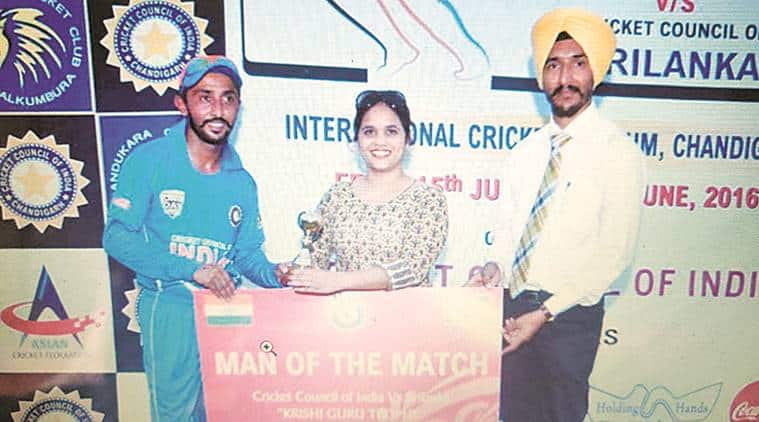 BCCI uses this photograph of Ravinder Dandiwal (right) in its educational sessions.

After The Indian Express first reported that an Indian man hailing from Mohali has been identified by the Australian police as the alleged kingpin of a major international tennis match-fixing syndicate, Ravinder Singh Dandiwal, has been arrested. This comes days after this paper reported about a T20 league that its organisers claimed was being played in Sri Lanka, but was staged in Punjab instead.

The police are also exploring his possible connection with the fake Uva T20 League tournament. The Indian Express last week reported about the T20 League, that was purportedly being played in Sri Lanka but actually held at Sawara village near Mohali. The police had said they were probing the possible involvement of Dandiwal in the league.

Dandiwal, who was named as a suspect in the tennis fixing racket by the Victoria Police in Australia, also figures on the watchlist of the Indian cricket board, the BCCI’s top anti-corruption official had told The Indian Express. He was recently named as the “central figure” in an alleged tennis match-fixing scandal related to at least two lower-level tournaments in Egypt and Brazil.

The Sydney Morning Herald reported that the Victoria Police named Dandiwal as the “central figure” in the fixing scam where operatives convinced low-ranked tennis players to throw matches while associates placed bets with bookies.

On social media, his profiles list him as “Dandiwal a.k.a. RS Dandiwal”, “General Secretary of the Cricket Council of India”, “Chairman of the Cricket Premier League”, and “Managing Director” of Ultimate Sports Management. The logo of Cricket Council of India resembles that of the BCCI, with the shape of its outer edges and the organisation’s name among the few visible differences.

Dandiwal is known in the Chandigarh cricket circuit and had been organising private limited-overs tournaments and leagues that were not recognised by the BCCI. He has also been involved with T20 leagues abroad.

Jane Fonda: ‘It’s much harder to be young than it is...